First reported by Jacobsen [JACS91-113-7063] following work on related systems [JACS90-112-2801]. Enantioselectivity has been rationalised by a side approach, over the downward oriented benzene ring of the complex in a ‘stepped’ conformation, represented with cis-β-methylstyrene as the substrate and resulting in mnemonic A.

Epoxidation of some cis-alkenes (notably cis-cinnamate esters) results, in addition to the cis-epoxide, in significant quantity of the corresponding trans-epoxide, especially with electron-withdrawing aryl substituents (for which the trans product may be the major isomer). This has been rationalised by epoxidation occurring stepwise via a radical intermediate permitting bond rotation. With double-bond substituents that are less able to stabilise a radical (alkyl rather than aryl) oxygen transfer may well be concerted [JOC91-56-6497]. Epoxidation in the presence of certain quaternary ammonium salts such as N-benzylquininium chloride results in predominantly trans-epoxides in good ee [JACS94-116-6937].

Additive: 4-Phenylpyridine N-oxide (4-PPNO) usually used as an additive to enhance the rate (e.g. 3-fold increase for the epoxidation of cis-ethyl cinnamate with 0.25 eq. of 4-PPNO). The N-oxide does not act as an oxygen source, neither is it coordinated to Mn(V) in the oxygen transfer step. Instead proposed to coordinate to the starting Mn(III) complex and inhibit the coupling of this with the active Mn(V) complex to give an inactive μ-oxo Mn(IV) dimer [Tet94-50-4323]. 4-(3-Phenylpropyl)pyridine N-oxide was developed as an additive for indene epoxidation [first step in the synthesis of Crixivan [indinavir]] [TL96-37-3271].

Oxidant: Early experiments in this area were performed with stoichiometric oxidants such as iodosylmesitylene. The key breakthrough was the use of sodium hypochlorite (commercial bleach) as oxidant [JOC91-56-2296] as now used in the standard protocol. Higher ee values may be achieved by the use of m-CPBA as oxidant with NMO as additive at -78 oC [JACS94-116-9333, TL95-36-5457].

Examples: The following lists examples reactions for which the application of this catalyst has resulted in >80% ee. ACE = Asymmetric Catalytic Efficiency (6 entries).

Other cis-alkenes exemplified with catalyst loading as low as 2 mol%. Absolute configuration of these products not given. 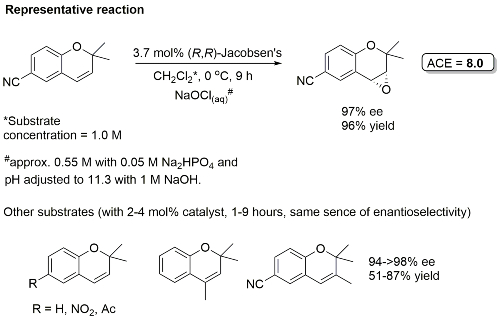 In the absence of geminal substitution at the 2-position allylic oxidation resulted (i.e. to coumarin).

Major cis-epoxide used for the synthesis of the taxol side-chain. 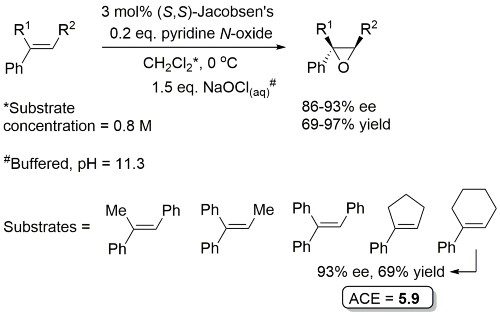 1-Ethynylcyclohexene also used but absolute configuration of the product not given (86% ee, 61% yield). 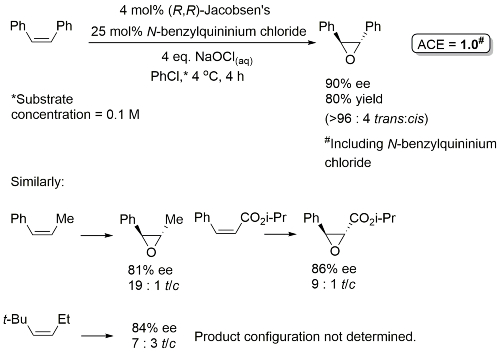 Epoxidation with achiral (salen)Mn catalysts in the presence of N-benzylquininium chloride resulted in racemic epoxide products.