As a synthetic chemistry group we are interested in:

a) catalysis – with the objective of achieving greater selectivity and activity;

b) bioactive compounds and pharmaceuticals – with the objective of synthesising novel compounds applicable to drug discovery.

Underpinning these goals is the development of methodology for the stereoselective synthesis of organic and organometallic compounds, and the exploitation of multiple stereogenicity in the target compounds.

The group has a long-standing interest in the synthesis of chiral ferrocene-based ligands as exemplified by the Phosferrox ligands, e.g. 1. When combined with a transition metal these have found numerous applications in asymmetric catalysis [link]. We are now developing methodology for simultaneous ligand synthesis/metal capture from a precursor metallacycle, as illustrated by the generation of Phosferrox-Pd complexes from palladacycle 2.1

Several methods have been developed within the group for the synthesis of planar chiral metallacycles by stereoselective C-H activation using a variety of transition metals.2 On combination with ligand synthesis/metal capture there is the potential to provide two-step access to multiple catalyst candidates for use in many different areas of asymmetric synthesis.

We are investigating the potential of sequential stereochemical introduction within the catalyst of an asymmetric reaction as a means of improving product enantioselectivity. This is based on the observation that addition of a chirality element to the parent chiral ligand (LP) of a metal catalyst results in matched (LM) and mismatched (LMM) ligand diastereoisomers for which the product ee (enantiomeric excess) values are LM ee > LP ee > LMM ee.3

For example, methodology has been devised for the synthesis of both (S,Sp) and (S,Rp) planar chiral Phosferrox diastereoisomers,4 and for all four stereoisomers arising from the introduction of a P-stereogenic centre.5 Thus selection of the matched (S,Sp) or (S,Rp) ligand diastereoisomer for a given reaction may be followed by selection of the matched/matched ligand containing a P-stereogenic centre for further improvement of product enantioselectivity. This approach is also applicable to other ligand types, notably the bisphosphine Josiphos ligands [link].6 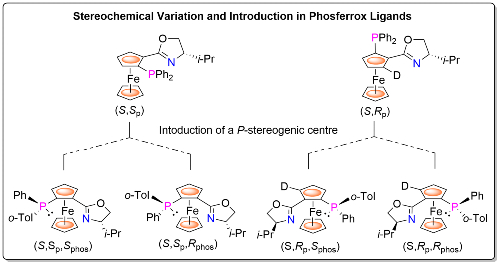 Underpinning this work are studies on estimating the relative rate of matched and mismatched reactions for the second step of such a sequential process, and deconvoluting the substrate and catalyst influences on overall selectivity.8 This information may then be used to predict the outcome of kinetic resolution reactions that result in the formation of a new stereogenic centre, additional methodology for the synthesis of stereodiverse compounds of interest. 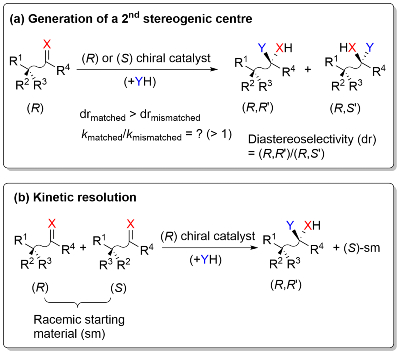 This approach aims to improve the characteristics of chiral bioactive compounds, principally selectivity and potency, by incorporating small substituents such as a methyl group to create an additional stereogenic centre. Utilising methodologies described in the above programmes, we are targeting the modification of a number of existing small-molecule pharmaceuticals.